Are There Any Agreed Upon Specs of What Defines Compact System Cameras?

Compact System Cameras are a relatively new initiative from the tech giants of the camera industry and it seems so far there is a considerable amount of disagreement amongst them as what the exact technical specifications of  Compact System Cameras should be. At the present, we have Compact System Cameras being produced by eight manufacturers, including the market leaders such as Nikon,Olympus, Panasonic and Sony. We have hybrid DSLRs with compact-derived controls from Panasonic, slick and simple bodies with Pen and OM-D series from Olympus, and unique UI cameras behind the DSLR-lenses from Sony with their Sony NEX Compact System Cameras series. 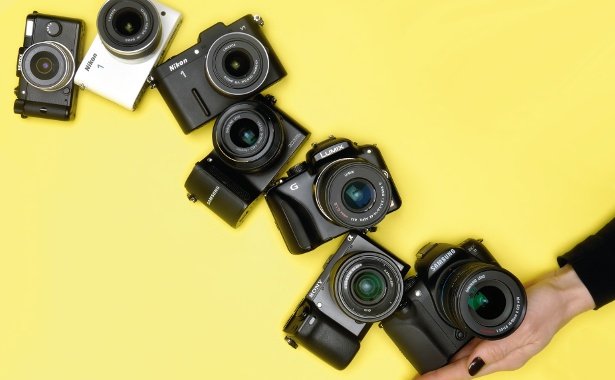 There are Compact System Cameras with a Nouveau and Retro Style

Broadly speaking, we can categorize these cameras into two main styles: nouveau and retro. Manufacturers such as Fujifilm, Leica and Olympus seem to have retro leanings which aim at gaining the attention of the consumers by commanding their nostalgia back to the film days. On the other hand, giants such as Sony, Nikon and Panasonic have preferred to release Compact System Cameras with ultra modern unique designs. Nikon seems to have added just a little more than the compact cameras to its mirrorless cameras since the only control a consumer has is the shutter release. Sony has adopted the appropriate technology but the user interface used in Sony cameras seems a bit unrefined and would certainly make a lot of consumers uncomfortable. As for the cameras form Fujifilm, the external controls seem to be perfectly fine, but there seems to be no progress in certain features such as autofocus and write speed/buffer. Finally, cameras from Samsung are quite reasonable, even though their autofocus and sensor is a bit outdated. Besides, cameras from Samsung are also relatively highly priced compared to other Compact System Cameras offerings available from other manufacturers though Samsung may have something up their sleeve. So in one respect or the other, there seems to be a lot of disagreement among manufactures and there are certain technical flaws that still need to be addressed mainly the focus speed at moving objects and in low contrast situations. Certain refinements and modifications are needed in these cameras, which we hope would be undertaken in near future.

It is evident that there are certain aspects that have been compromised during the manufacture of these cameras. Even the giants such as Nikon and Sony have failed to deliver a class product, with Sony compromising on lenses even after manufacturing great sensors. The lens for the Sony NEX system just seem displaced and huge compared to the size of their bodies specially due to route taken of having a big sized sensor in their bodies. Same goes for Fujifilm which has failed to adapt to t the latest technology  providing a camera without proper audio and video quality besides having a very poor automatic focusing system. As for Samsung their prices are very high when compared to similar offerings in market ant their option of lenses available in market is very restricted and we have not seen any special touch of uniqueness in Samsung cameras even though they are quite sound on the technological front. As for the Panasonic and Olympus Micro Four Thirds cameras they have also their faults. The Panasonic cameras lack in body image stabilization, lack of a powerful JPEG engine and a auto focusing system that does not work well with moving objects. As for Olympus their biggest flaw is the lack of a decent adaptor to the great Four Thirds lens and a non working automatic focus system with moving objects.

So far the best Compact System Cameras System that one can encounter in the domain of mirrrorless cameras is the Panasonic/Olympus Micro Four Thirds combo. With a reasonable image quality, this seems to be the perfect camera gear in compact physical structure. But of course, there are certain aspects that would be better on Nikon or Sony devices, which means that those systems do have their own qualities. However, one can but wish that eventually, all the manufacturers would arrive at some agreed upon set of technical specifications for what defines Compact System Cameras so the unnecessary diversification may stop.